A Summer in North America

Of course, everyone back in Germany asked about what our observations were regarding Mr. Trump and what Americans thought of him. And of course, there was almost no one who me met on our trip who did not bring the topic on the table at some point.

The truth is, that among all the people we met during those three months, there was only one who had voted for Trump. Most people started the conversation immediately by apologizing for their president which appeared to me as something rather painful for many, because in general, the office of the president is something of such high value to every American.

The one Trump voter argued – in a nutshell – that the people were done with political elites and the Bush and Clinton dynasties, and that if the US were already going down the drain, Mr. Trump would accelerate it which would give America the opportunity to rebuild itself. – Hm.

“Mr. Trump is the wrong answer to the right questions.”

This is how someone summarized his view on the situation which probably brings it to the point best. No doubt, the USA are facing massive socio-political challenges. If I were to put it short, I would say that rural America in many parts of the country is as poor as ever, and that the gap between rich and poor in the cities is enormous.

Only to give a few examples which we have either witnessed ourselves or heard about in our many conversations on the state of the country: The part of Idaho which we visited has cut down one school day per week for budgetary reasons, meaning that students go to school for four days a week only. Thousands of people in San Francisco have a job and make a living but cannot afford housing and live in tents and their cars. Decent health care remains affordable to the privileged only (I have never seen so many people with missing teeth then in the last three months), the American food industry is swamping the country with highly processed foods, too many people are just outrageously obese, too many TVs are screaming their program at people of all ages, prescription drugs are a huge problem around the country, the everyday family life seems to be even more submitted to the rules of efficiency, and the tension between the ethnicities appears as high as I have ever seen. It seems that the political and spiritual institutions have failed and are losing their followers, whereas the new economy and universities are dashing away in their ivory towers, inaccessible to so many.

In light of Mr. Trump’s performance, quite a few have said that they are looking to Germany and Mrs. Merkel to sort out the new world order. And I can see what they mean after having travelled the country for three months. Even though it is and must continue to be heavily debated as it is not a “deus ex machina”, it was a wise political decision which German leaders took at the outset of post-World War II Germany to implement a functioning social benefit system. Even though it could be managed better and is abused in so many ways, it is still worth every penny. Because it allows everyone to live a decent life. And that to me is something of a basic humanitarian principle.

At the same time, the American drive and kindness is still as inspiring as ever. We have encountered so many welcoming and hospitable people, opening their arms and doors to us, listening to us, sharing with us their stories, following our trip on the blog and in real life. We have reconnected with old friends and made many new ones, they care about us, and we care about them. The American spirit is alive. And Trump will not change anything about it. That I am convinced of.

And besides, everyone “broom before their own house” as we say in German. Returning to Germany which is amidst the electoral campaign for the next federal elections, it becomes very apparent that Germany has to deal with a lot of internal unrest itself. A new right-wing populist party has been rising over the last five years, moving into state parlaments and city halls. One of their campaign posters shows a (white) pregnant woman lying on her back in the grass, showing her naked belly. Below the picture, it says: “Neue Deutsche? – Machen wir selber!” (“New Germans?” – “We make them ourselves!”). A message that needs no comment.

I couldn’t believe it when I first saw it. Words still fail me. I thought we had overcome such language and such thinking in post-Holocaust Germany, and it shows that we are confronted with the same issues in Germany and Europe as in the USA. Wrong answers to the right questions are as likely over here as they are over there.

One year ago, we returned to Berlin after our three months family tour through the US. We have thought a lot about this return in the past days, not only

END_OF_DOCUMENT_TOKEN_TO_BE_REPLACED 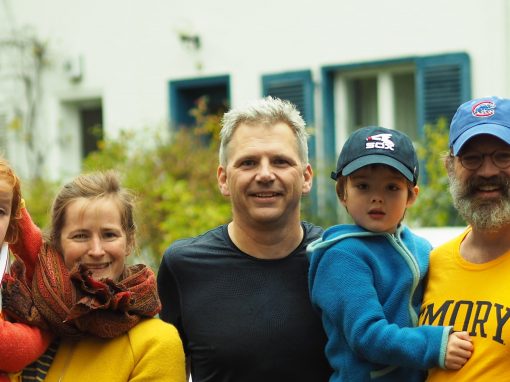 Two months have passed since we returned from our American tour, and here we are, leaving Berlin again for our first little one-week trip to the South of France. When

END_OF_DOCUMENT_TOKEN_TO_BE_REPLACED 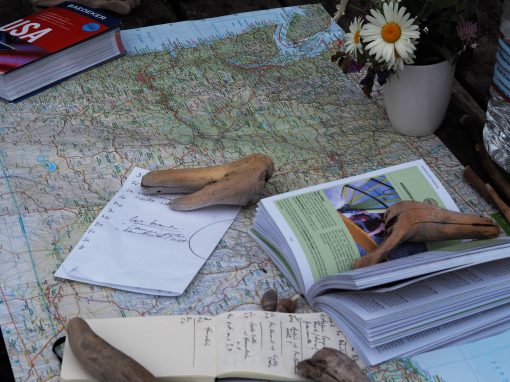 2 September 2017 A Summer in North America

So here we are. One week has gone by since we returned to Berlin on that sunny Friday morning. And we are still not fully settled in. The last days